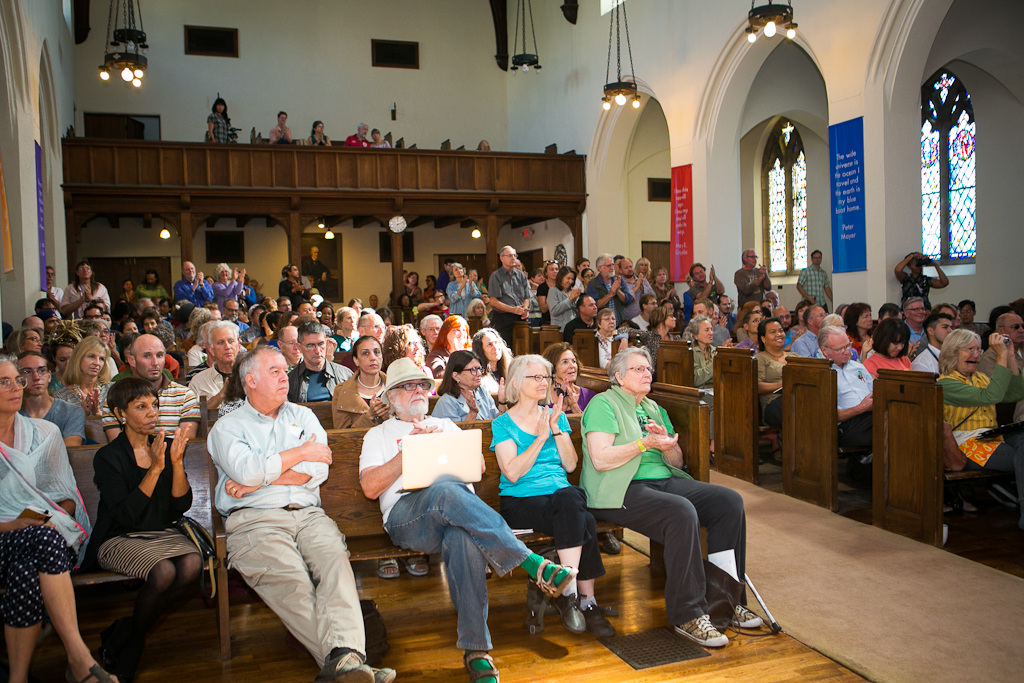 Rob Hopkins visit and The Just Doing Stuff Fair was a stunning show of the sea change in Pasadena area! Change is afoot and in the air and Transition Pasadena is taking its place at the hub! It was a grand celebration of local hope and cheer and truly a reflection of the Power of Just Doing Stuff

Thanks goes to nineteen sustainability groups including Complete Streets Coalition, permaculture and garden folks, Food Co-op, Time Bank and Tree People came to share their fun and wisdom. And thanks to the 57 essential volunteers, who came to host the event, and show off our Repair Cafe as well. Twenty-two repairs were completed during the event!

Rob Hopkins, who describes himself as the Catalyst and Outreach Manager of the international Transition movement came to share news from across the pond where Transition thrives in small towns and to see what it looks like in ten metropolitan areas in the US. Pasadena was his ninth stop.  He shared a splendid several hours with 250 folks at Throop Church and Hall.  He entertained us first with a substantial presentation on cheerful new local economy approaches including local banks, local currencies, cooperative models.  He called to mind the principle of building on our strengths with the example of a town looking for a project to create a co-op enterprise. They entertained noble, yet dry concepts of the business possibly being solar panels or grey water reclamation, but the interest waned. Then they asked what are we interested in? What would be a cheerful place to start this new economy business? Beer! And so They formed a successful Beer Co-op!

Q and A followed, hosted by the charismatic Megan Hobza of Whittier Time Bank. The room burst with question cards and eventually Rob had to draw cards from the stack at random.  Throop Board members remarked that they had not seen this many folks in the church at one time for many years. It was SRO after the balcony was at capacity.

I cannot forget the Reggae Bubble Bath dish washing crew who kept the kitchen afloat during the event. Even the mayor’s field rep. dried a heap of plates!

As we sold out the last of our ”The Power of Just Doing Stuff” books, Rob Hopkins was interviewed by Carter and Rishi of KPFK's Focus on Food in the green room before his departure.

Thanks for coming Rob!